Cue Card # a famous person you would like to meet

There are so many people that we adore but then there is this one person in everyone’s life that they follow, that they idolize that people wish to meet in their life-time. Let us today have a look at some of the cue card questions related to a famous person that one would love to meet.

Tell about a person you would like to meet.
You should say

Tell us about a famous person you would like to meet.

and explain what would you do if you meet him/ her. 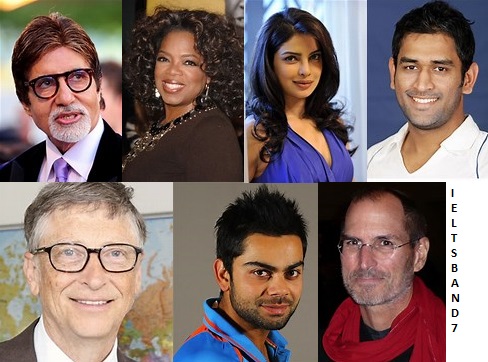 People are all essentially made up of the same bio-molecules, the same core elements. Yet, we are fundamentally unique in nature, no two humans are alike, be it appearance or personality. On the basis of these distinctions we have managed to create a superficial society, based on race, gender, financial worth, and skill set. By this system we have promoted some people to be widely recognized, they are identified as famous people. When we are asked as to whom we would like to meet, most would select a person from this narrow category of famous people. I am no exception.

In fact, I would like to meet the person on the very top of this so-called social pyramid. I would like to meet Mr Gates himself. There is hardly any need for an introduction; William Henry Gates III is the world’s second wealthiest man, pray who has not heard his name?

I would like to meet Bill Gates due to his admirable philanthropy, business savvy, charisma and scholarly temperament. He has been my role model for as long as I can remember. I commend Mr Gates’s positivity and upbeat aura. He is a true family man, in any interview in that he is allowed to, he likes to fondly indulge in his love for his family. But most importantly, he is humble, there are countless instances where he showed humility; more than most would if they were in his station in life.

I would feel absolutely honoured to meet my idol. There would be a lot of questions i could ask him. Perhaps about his favourite book, and what book he is currently reading, as I too am an avid reader. I would ask about his humility, how the challenges he overcame shaped him, about his family, about the difficulties of being part of the ultra-wealthy. I am sure I could think of plenty more questions to ask him when the time comes.

There are so many people that I love and adore but the one person I would love to meet someday is Priyanka Chopra. She is the most successful Bollywood actress of our times, having won Miss world she entered into the Bollywood and has swept us all with her amazing acting. Then, she moved onto singing songs and has some great singles like In my city, I can’t make you fall in love with me. From there, she has even acted in TV seasons in Hollywood as the lead.

The reason I want to meet her is because I believe she is that one lady that is a walking promoter of girl power. She has taught so many girls, in so many ways, that if one is ready to work hard on their dreams the world is all theirs and that there is nothing in this world that is unachievable and one should never stop. Having achieved one thing does not mean it is the end of your story. From every achievement or failure begins a new path, the one that will take you to new areas.

Priyanka Chopra truly lives in the heart of many of our countrymen and so many of women get inspired from her. Not only is she amazing at her work, she has also been associated with lot of philanthropy work that helps people all around the world in education and help provide better living facilities.

The reason I want to meet her is because I want to know her. What was that one defining moment when she realized that this is something that she will do. I want to meet her and interview her in sometime, to know what goes inside the head of the most successful person I have ever come across.

We all idolize lot of different people and the one person that I truly admire is Mahendra Singh Dhoni. He is the captain of our Indian cricket team and has led us in some of the most toughest situations and made us victorious. It was under his captainship that India won its first T20 world cup and the world cup in 2011. He is often regarded as the captain cool because of his unwavering behavior in spite of any loss or victory.

The reason I want to meet him is because he is the true representation of a common man with so uncommon dreams. It was his journey that is so inspiring. From having faced issues that we all face, parental pressure, peer pressure, job insecurity, finding the right path and then landing into something that is true to his heart.

He has been an inspiration to many people and even after having achieved so much it is humble nature that charms everyone. The fact that he is close to his family and that he respects his country the most.

He is one of the most famous cricket captains the history of our cricket has seen. Not only because of the way he leads the team and made it victorious, but because of how he changed the environment of the dressing rooms in the cricket grounds. How he taught people to work together and in many ways the country that no matter how successful you become in your life, what is most important is that you love and respect the right people in your life. That you handle criticism and flattery in the same way and do what is important for you and your country.