You should spend about 20 minutes on this task.
The bar chart below provides information about the time spent in leisure activities by males and females in the USA in 2014.
Summarise the information by selecting and reporting the main features, and make comparisons where relevant.
Write at least 150 words. 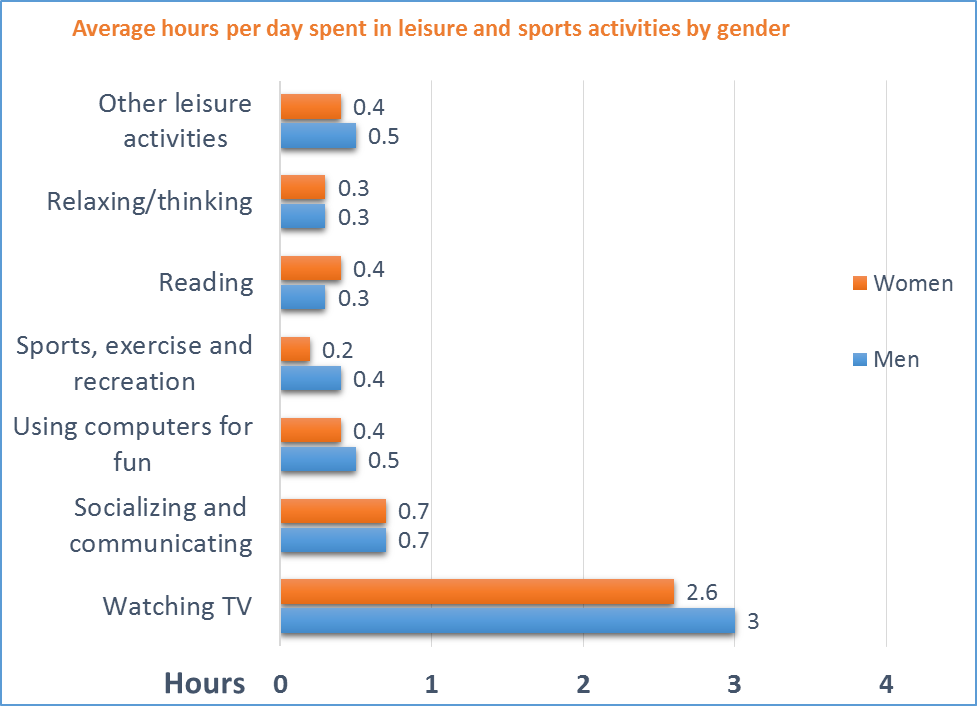 leisure activities by males and females in the USA

The bar graph compares the amount of time men and women expended every day in different leisure and sports activities in America in 2014.
One striking feature of the chart is that watching TV was the favorite free time activity for both the genders. On average, males spent 3 hours daily in front of their TV sets while women spent 2.6 hours. Socializing and interacting with family and friends was the next most preferred form of recreation. Both men and women spent 0.7 hours per day on this activity.
Leisure activities, sports, exercise and using electronic devices like computers were more popular among males. On the other hand, the opposite was true for reading as females expended 0.4 hours daily on this activity whereas men spent merely 0.3 hours. Interestingly, thinking or relaxing were equally popular among both sexes. This form of entertainment accounted for 0.3 hours daily for both men and women.
Overall, there were minor differences in the amounts of times males and females spent in different leisure and sport activities but watching TV was the activity which occupied the most time. (184 Words.)

You should spend about 20 minutes on this task.
The tables below show the distribution of students at UK universities by mode of study and gender.
Summarise the information by selecting and reporting the main features, and make comparisons where relevant.

The tables compare the proportion of males and females enrolled in full-time and part-time postgraduate courses at UK universities in four academic sessions between 1996 and 2010.

It is evident that student enrolments in full-time courses followed an upward trend for both the genders throughout the given period. The number of males rose from 75,370 in 1996-97 to 151,275 in 2009-10 while that of females increased from 62,344 to nearly 146,980 during this period. These figures also indicate that there was a gender disparity in full-time postgraduate programmes. In 1996/96, the gender disparity was the highest (75,370 males versus 62,344 females) but the distribution became more balanced in the following years.

Focusing on part-time courses, overall more students were registered in these programmes as compared to full-time ones. In 1996-97, about 114,000 males and about 109,000 females selected part-time courses. In the next two academic years, there was a rapid increase in the percentage of female students whereas the number of male entrants fluctuated. The year 2005-06 had the highest enrolment rate in part-time programmes for both sexes, 138,505 males and 172,640 females. Notably, the number of students dropped in 2009-10.

In general, it can be concluded that full-time courses were more popular among males than females during the given period. The trend for part-time courses, on the other hand, was the opposite.

IELTS Academic Writing task 1: Production and consumption of potatoes in 2006

The tables below provide information about the consumption and production of potatoes in five parts of the world in 2006. ­­

The tables give data regarding the quantity of potatoes consumed per person (in kg) and grown (in million tonnes) in five regions in 2006.

Looking at the regional consumption, Europe was the biggest consumer with 96.1 kg potatoes eaten per person. It was followed by North America where per capita potato usage was comparatively less, only 57.8 kg. At the next levels i.e. the third and fourth, were Asia and South and Central America.  These areas had similar levels of consumption, 25.8 and 23.6 kg respectively. In comparison, an average person in Africa ate less than half this amount (14.1 kg) annually, making it the smallest consumer.

As regards the production, Asia and Europe were the two largest potato producers in 2006. Their production amounted to approximately 131 and 126 million tonnes respectively. North America stood at the third position. But, its contribution was only 24.7 million tonnes which is about one fifth of the European share. The other regions, South and Central America and Africa, were far behind Europe. Each of them produced around 16 million tonnes of potatoes, nearly one eighth the European proportion.

Overall, Asia and Europe were two primary potato producing regions whereas Europe and North America were the two largest consumers. 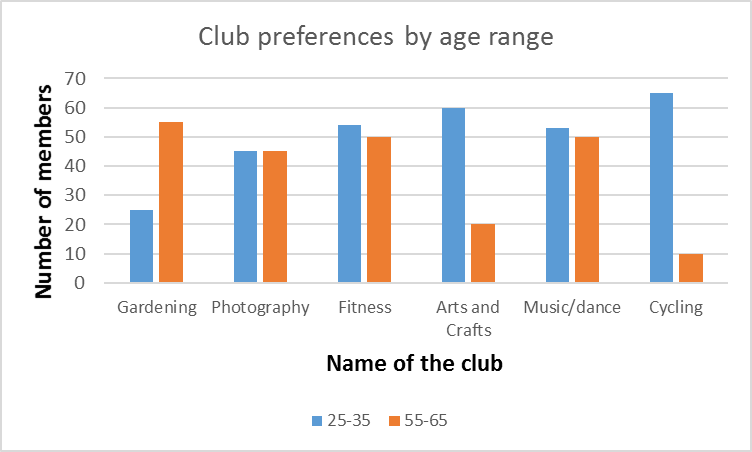 In general, it can be concluded that some clubs attract both young and old people. Nonetheless, overall, the younger age group is significantly more involved in various activities than the 55-65 year-olds.(220 Words)