IELTS WRITING TASK 1
You should spend about 20 minutes on this task.
The bar charts below provide information about honey production and honey producing colonies in the five American states in 2006.
Summarise the information by selecting and reporting the main features, and make comparisons where relevant.
Write at least 150 words. 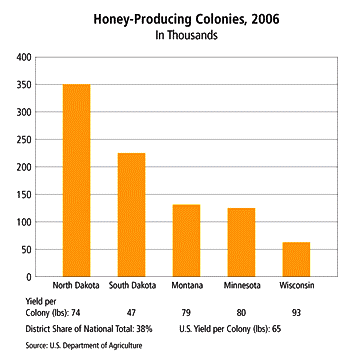 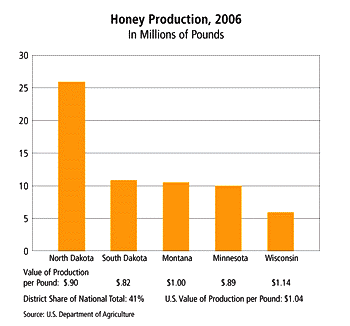 The bar graphs represent the amount of honey produced and the number of bee colonies in five US states namely North Dakota, South Dakota, Montana, Minnesota and Wisconsin in 2006.
Looking at the first bar graph, the combined honey production of all the given states was approximately 62 million pounds. Notably, North Dakota’s contribution to the total was the highest while that of Wisconsin was the lowest, at just over 25 and 5 million pounds respectively. The other three states (South Dakota, Montana and Minnesota) collectively accounted for nearly 30 million pounds of honey. It is worthwhile to note that the amount of honey produced in these three regions was approximately equal, around 10 million pounds.
Focusing on the distribution of honey bee colonies, North Dakota stood at the top position with 350, 000 colonies. It was followed by South Dakota which had nearly 225, 000 colonies. Figures in Montana and Minnesota, on the other hand, were comparatively lower but they were very close to each other, about 125,000. As in the first chart, Wisconsin grabbed the last place with just over 50,000 colonies.
Overall, it is clearly evident that out of the five listed states, North Dakota was the biggest honey producer with maximum number of bee colonies. Interestingly, even though South Dakota had more colonies as compared to Montana and Minnesota, its production was not significantly different from them. (231 Words)