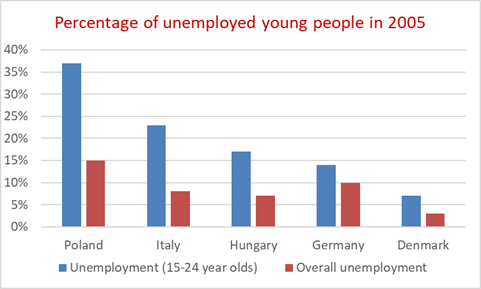 The bar chart provides information about the unemployment rates of young adults aged 15-24 and that of the total workforce in five European countries in the year 2005.

Looking at the proportion of jobless young adults, the lowest figure was recorded in Denmark (just over 5%).  Germany and Hungary had approximately three times higher youth unemployment rates compared to Denmark. The highest unemployment rates were observed in Italy and Poland, about 23% and 37% respectively.

As regards the overall unemployment rates, Poland witnessed the highest figure in this category as well.  Fifteen percent of the Polish workforce was jobless while 5% fewer people were idle in Germany. Italy and Hungary came next with similar levels of overall unemployment, nearly 6-7%. In comparison, Denmark had only around 3% unemployed people.

In general, what stands out from the chart is that the youth unemployment rates were significantly higher than the overall figures in all the listed countries. Poland ranked the first in both the categories while Denmark came last. Italy and Germany were in the halfway marks with Hungary representing the overall mean.